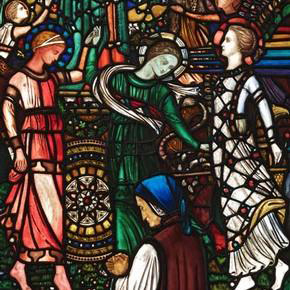 The stained glass firm of Lavers and Barraud was established in 1858. Barraud was dissatisfied with his own designs and the Gothic architect William Burges recommended hiring Nathaniel Westlake as a designer. A year later the firm moved to No.22 Endell Street. It was Westlake's knowledge of medieval art, Pre-Raphaelite style and simplification of previously over-elaborate drawing that brought the firm fame and success in the 1860s. He became a partner in the firm and its sole proprietor in 1880. The firm was then known as Lavers & Westlake. He designed side windows in St Martin le Grand, and windows in St Paul's, Worcester,and Peterborough Cathedrals and other prominent churches. As the Aesthetic movement gathered momentum, the colour of his stained glass became diluted. Between 1881 and 1894, Westlake published four volumes entitled A History of Design in Painted Glass. The firm closed on Westlake's death. No.20 Endell Street was Westlake's home during the 1880s.