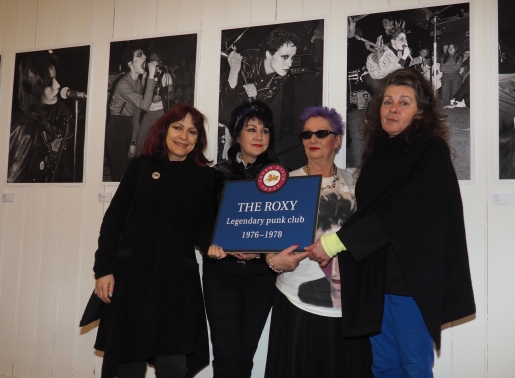 Andy Czezowski, Susan Carrington and Barry Jones set up the Roxy in December 1976, specifically to promote punk music. At the time there was no other club dedicated to the new genre, which was rejected by the media and the music industry. Don Letts was the DJ and every major punk band played here apart from the Sex Pistols (and in early 1977 Malcolm McLaren was deliberately 'resting' them to increase their mystique). As punk became more popular the landlord sought to raise the rent and there was a change of management in April 1977. The Roxy continued for another year until rents really started to rise in the area.  Bands that appeared there in the first four months of the club's life included: The Adverts, The Boys, The Buzzcocks, Chelsea,  The Clash, Cock Sparrer, The Cortinas, Wayne County & the Electric Chairs, The Damned, The Drones, Eater, The Jam, The Lurkers, Masterswitch, The Models, Johnny Moped, The Only Ones, Penetration, Police, The Rejects, Sham 69, Siouxsie & the Banshees, Slaughter & the Dogs, The Slits, The Stranglers, Subway Sect, The Vibrators, Cherry Vanilla, Wire, X-Ray Specs and XTC.

The plaque was unveiled in March 2017, an event celebrated in a short film.

The plaque, sponsored by Shaftesbury plc, was formally unveiled in front of a large, lively crowd of many former musicians and fans and the media by queens of Punk, Jordan, Gaye Black (The Adverts), Pauline Murray (Penetration) and Tessa Pollt (The Slits), along with Roxy founders Andrew Czezowski abd Susan Carrington. Punk poet Stephen Micalef of Sniffin' Glue read a specially composed ode in dedication. The reception and private view of the exhibition which followed the unveiling featured Punk DJ set by Jeffrey Munday.

The extremely popular free exhibition, fear and loathing at the Roxy, also sponsored by Shaftesbury, was curated by artist and historian Jane Palm-Gold and ran for three weeks at nearby 35-37 Neal Street. It showcased iconic moments of music history made at the Roxy, as seen thrugh the lenses of legendary photographers Derek Ridgers, Ray Stevenson and Jeremy Gibbs, among others.

Link to Plaque Unveiling and After Party video on YouTube

Link to Fear & Loathing at the Roxy Exhibition video on YouTube

Shaftesbury is proud to support the Seven Dials Trust's People's Plaque scheme by sponsoring the plaque which celebrates The Roxy.

Shaftesbury is a Real Estate Investment Trust which owns an exceptional real estate portfolio extending to 14 acres in the heart of London's West End. We have a long-term management strategy which creates and fosters distinctive, lively and prosperous environments for tenants and visitors and we engage with our community groups and charities to ensure that we are aligned with our community.