The first tranche of twelve People’s Plaques has been sponsored –

We are delighted to report that we have secured sponsorship for the first twelve People's Plaques.

Trustee Mark Rupert Read is sponsoring the plaque to television pioneer John Logie Baird. This will be installed on Tower Street, commemorating the first experimental television broadcasts which Baird carried out there between 1926 and 1928.

We are grateful to Equity, the arts and entertainment union, for granting us permission to install the plaque on their building. Another generous trustee, Anja Saunders, has chosen Syd Barrett, songwriter, musician, singer and co-founder of Pink Floyd, who lived for a while in Earlham Street. Trust Patron and Founder trustee Christina Smith OBE has sponsored two plaques to two very local personalities - Ellen Keeley, barrowmaker, and architect Jim Cadbury Brown, both in Neal Street.

Shaftesbury, the area's largest freeholder, is sponsoring three plaques. First to go up was The Roxy Club (Neal Street) which from 1976-1978 was the home of punk music, The installation and inveiling took place on 25th April 2017. The Kip (Short's Gardens), 1860-1922, Tom Farmer's notorious lodging house, where residents slept leaning on a rope; and The Cave of Harmony (The Dials), a famous watering hole for London intellectuals from 1927-28, run by actress Elsa Lanchester, who went on to find fame as the Bride of Frankenstein, will follow.

The Delfont Mackintosh company is sponsoring a plaque to knight of the theatre, Sir John Gielgud, in Upper St Martin's Lane, while Capital and Counties, Covent Garden has chosen to commemorate Lionel Lukin, the inventor of the lifeboat. Also a coachbuilder, his plaque will be on Long Acre, which was the centre for coach building in the eighteenth and nineteenth centuries.

Two more plaques on Long Acre are also in the pipeline for 2017. The Mercers' Company is sponsoring the plaque to John Dryden, England's first Poet Laureate, as well as a renowned literary critic, translator and playwright. Local resident and Executive member of the Covent Garden Community Association, Elizabeth Bax, is sponsoring the plaque to John Jacob Holtzapffel, a celebrated machine and lathe maker, in memory of her late husband.

The pioneering midwives Dame Rosalind Paget and Zepherina Smith will be commemorated on the site of the former British Lying-in Hospital in Endell Street where they trained. It is now occupied by he Hospital Club, who are sponsoring the plaque.

Historian Steve Denford carried out extensive research on behalf of the Trust and came up with a long list of over 120 names. Two lively meetings of local residents and businesses resulted in the selection of a short list of 31 candidates to be commemorated. We will make good use of all the research through the use of QR codes on each plaque leading to more detailed information on each of those commemorated. The plaques will be installed around the Seven Dials area in both Camden and Westminster, joining the first plaque, unveiled by Cilla Black, commemorating Brian Epstein of Beatles fame. 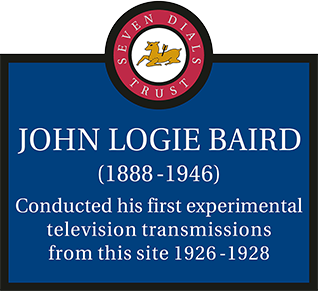