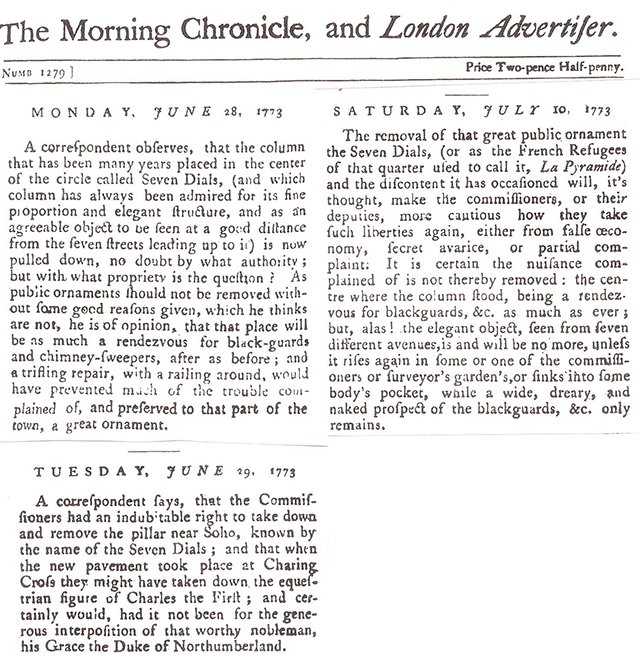 1773 The Morning Chronicle and London Advertiser.

The reconstruction of the Sundial Pillar at Seven Dials was the first project of its kind in London since the erection of Nelson's Column in the 1840s. However, there is a fundamental difference between the Sundial Pillar and London's other great monuments - the Sundial Pillar performs a function: telling the time accurately on six dial faces. So our story isn't just about an imaginative solution to creating 60-foot deep foundations across a plethora of underground services and raising the funds to build it. It involved establishing the historic orientation of the sundials - the art of gnomonics, by which every sundial on the planet tells the apparent solar time specific to its location. Our astronomer had to calculate this for Seven Dials.

Our architect, A.D.Mason of Whitfield Partners, had to solve the riddle of Pierce's original 1693 drawing (found hidden away in the British Museum in a cupboard unopened for many years). The dimensions of the drawing did not match Pierce's handwritten notes and neither matched the remains of the original pillar now in Weybridge. A.D. Mason ended up with a 40-foot tall paper model. Trainee masons had to make the one-tonne dialstone absolutely accurately, which took three attempts. The designs and then the stone carving for the dialstone and the placement of the gnomons (which cast the sun's shadow on each dial face) had to exactly reflect the astronomer's calculations. Once this was done, the dialstone had to be placed atop the column with precise accuracy - this took three days, with the astronomer and the architect present on the scaffolding. It is an extraordinary tribute to all those involved in this complex project that all six faces tell the time accurately to within ten seconds.

Sundials tell apparent solar time. Sundials at either end of a football pitch would not tell exactly the same time. This geographical variation in measured time did not matter until the advent of the railways which required uniform timetables. Greenwich Mean Time was adopted across Great Britain by the Railway Clearing House in 1847. Our sponsored Time Plaques on The Dials show how apparent solar time is converted into Greenwich Mean Time at different times of the year.

The reconstruction of the Sundial Pillar was a complex project involving architecture, horology, gnomics, structural engineering, history, street works and much else. The Sundial Pillar brought back to life a lost neighbourhood whose name had disappeared from the memories of Londoners and was largely unknown to visitors. It has acted as an economic regenerator over time and become a new London landmark. As London's only pillar sundial it is a reminder of time-keeping as it was many years ago.

Read 26646 times
More in this category: Genesis »
back to top