The Trust’s Renaissance Study comprises the core Seven Dials Conservation Area which falls within the Borough of Camden. The new web-based version is being extended to incorporate streets which lie within the City of Westminster. In an unusual move Westminster City Council agreed to treat what is called Covent Garden Area 3 as their part of Seven Dials. This is the area from the borough boundary in Shelton Street down to Long Acre. This unusual example of cross-border working follows the principle of working in partnership which the Trust has promoted for more than 30 years. It has resulted in our façade lighting scheme and the template of York stone footways and multi-coloured dressed setts for carriageways crossing into Westminster down to Long Acre. It acts as a form of way-finding between Cambridge Circus, the Dials and down to the Covent Garden Piazza.

In 2006, Westminster commissioned a parallel study from W.S. Atkins for Area 3: 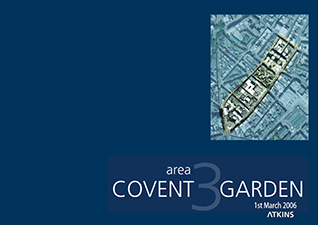