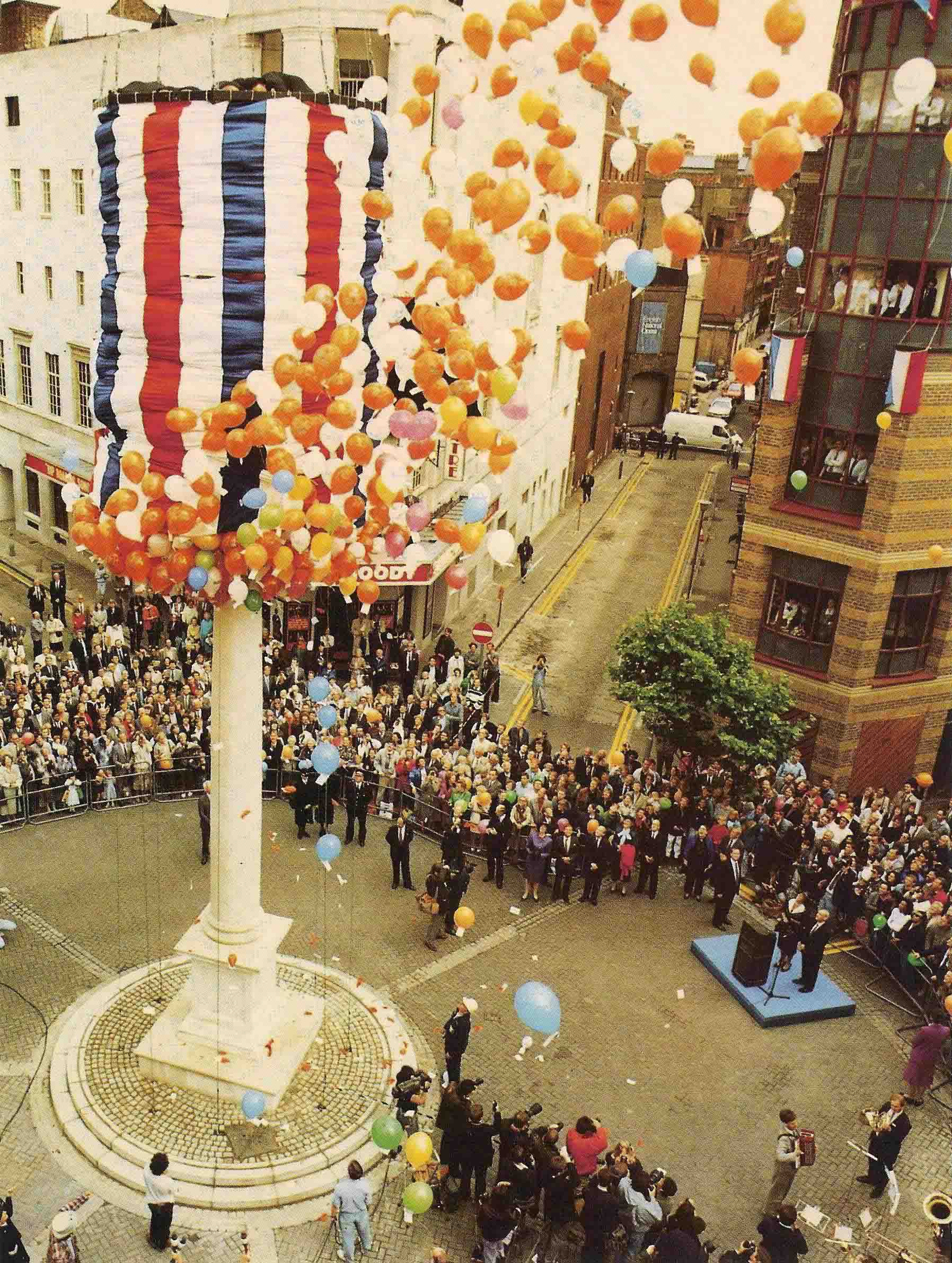 The Seven Dials Sundial Pillar was unveiled on 29th June 1989 by Her Majesty Queen Beatrix of the Netherlands, accompanied by Prince Claus. So what is the Dutch connection?

1988/9 was the Tercentenary of the arrival in England of Prince William of Orange and Queen Mary III, daughter of King James II.  Thomas Neale MP was one of the party which greeted William when he landed in Devon in November1688 and led him to London and through the complications of what came to be known as 'The Glorious Revolution'.

The events leading to King James fleeing the country and the assumption of the throne by William and Mary are complicated.The 'Glorious Revolution' was in fact an invasion. 'The forces that the Prince of Orange amassed for his invasion were vast, the flotilla consisting of 43 men-of-war, four light frigates and 10 fire-ships protecting over 400 flyboats capable of carrying 21,000 soldiers. All in all, it was an armada four times the size of that launched by the Spanish in 1588.' King James had made extensive preparations for this anticipated invasion, amassing a force of 25,000 men encamped on Hounslow Heath. James was England's last Catholic monarch and his fall became inevitable when many of his key supporters changed sides to support William of Orange who, in the end, facilitated James's fleeing the country.

Organising a Royal Unveiling and Hiding the Sundial Pillar

In June 1988 we were approached by the William & Mary Tercentenary Committee to ask whether the Sundial Pillar might be part of their planned year-long programme of celebrations by way of an unveiling event. This presented the trustees with a difficult decision: would the Funding Appeal still be incomplete at the time of unveiling? This, indeed, turned out to be the case. The trustees took the risk -  we were being invited to play an important part in the commemoration of a national event - the unveiling would be the finalé to the year-long celebrations and would be carried out by HM Queen Beatrix of the Netherlands with Prince Claus.

Little did we know what a task this would be and, in the end, how successful. We wanted to organise something out of the ordinary run of Royal visits. Devising the event and finding sponsorship took almost a year.

After much discussion, we came up with the idea of hiding the Pillar, once completed, before its unveiling – but how to achieve this? Our solution was ingenious. The Trust had already raised funds through advertising hoardings and our agents Mills & Allen found an unusual sponsor to conceal the Pillar… and one which raised £10,000 for the Appeal, which had yet to reach its target. The Carlsberg Brewery came up with the idea of concealing  the Pillar by covering it with two giant lager cans. Architect A.D. Mason devised the fixings to ensure no damage occurred. After many enquiries, we found two exceptionally helpful companies – Vanguard Engineering (who gave their services pro bono) and Phase 4 Events. Phase 4 manufactured a giant 50-foot- high shroud in the Dutch national colours and provided 8,000 bio-degradable balloons in similar colours to be released as the shroud was lifted by Vanguard. The Trust printed 8,000 return tags to be tied to each inflated balloon.

We also wanted ground-level activity to accompany the raising of the shroud. One of our local primary schools, St Clement Danes, joined with enthusiasm and suggested a short play to be performed in Short's Gardens. Alternative Arts, who had a long association with the area, provided stilt-men and performers and The Royal Opera House composed and performed a Royal Unveiling Fanfare. Trustee Christina Smith sponsored a reception at Smith's Restaurant where HM Queen Beatrix and Prince Claus would meet several groups including the area's oldest residents and longest-standing businesses. After many meetings with the British and Dutch Royal Protection Squads a walkabout from The Dials to the restaurant was agreed, with the Royal party meeting the Anglo-Netherlands Society en route. Taylor Woodrow, who were  on-site on The Dials, provided logistical support and the Met Police provided barriers for The Dials and walkabout route.

Hiding the Pillar went like clock-work. The trustees met while the lager cans were being installed, with a nervous architect rushing back and forth ensuring no damage to the Pillar occurred. The cans stood for two weeks and gained much media coverage. They were removed the night before the unveiling as the shroud was lowered into place by Vanguard Engineering. Throughout these complex processes London's missing monument was hidden from public view, enabling a spectacular reveal.

Before the unveiling of the Sundial Pillar could be confirmed as the finalé of the Tercentenary celebrations, we had to make a 'Statement of Case' to the Comptroller in the Lord Chamberlain's Office at Buckingham Palace. Many planning meetings were held. The Dutch contingent visited to test the walkabout route. In Short's Gardens, Camden re-surfaced the walkabout route when the aide-de-camp of HM Queen Beatrix almost fell.

Early on the morning of 29th June 1989 Seven Dials witnessed a never-before-seen phenomenon as a phalanx of Camden Council's cleaning machines appeared, hot-washing not just the streets but every lamp column, bollard and street sign too.

On arrival the Royal Party was greeted by Mayor of Camden, Councillor Barbara Hughes and Mayor of Elmbridge Borough Council, Councillor Iris Simmons MBE. The trustees were then presented. To the specially commissioned fanfare, HM Queen Beatrix pressed a button, the shroud lifted and 8,000 balloons were released. Each balloon had a return tag. The furthest to be returned came from the Grand Duchy of Luxembourg.

The Royal Party met the youth trainees and those involved with the planning and construction of the Seven Dials Sundial Pillar. The school children enacted the arrival of William and Mary in a brilliant five-minute play. They were given an impressive short talk by HM Queen Beatrix on the importance of homework. She asked one pupil what homework he had done the night before; the astute reply was, "I didn't have time as we were rehearsing." During the walkabout, the Royal party met members of the Anglo-Netherlands Society and local residents. On the borough border they were greeted by Lord Mayor of Westminster, Councillor Simon Maby and by the Rt Hon Peter Brooke MP. At the reception in Smith's Restaurant, the Royal Party met some of the area's oldest residents and businesses. On saying her farewells to the trustees, HM Queen Beatrix commented that the battle to save Covent Garden hadn't just saved the buildings but also "the social fabric". 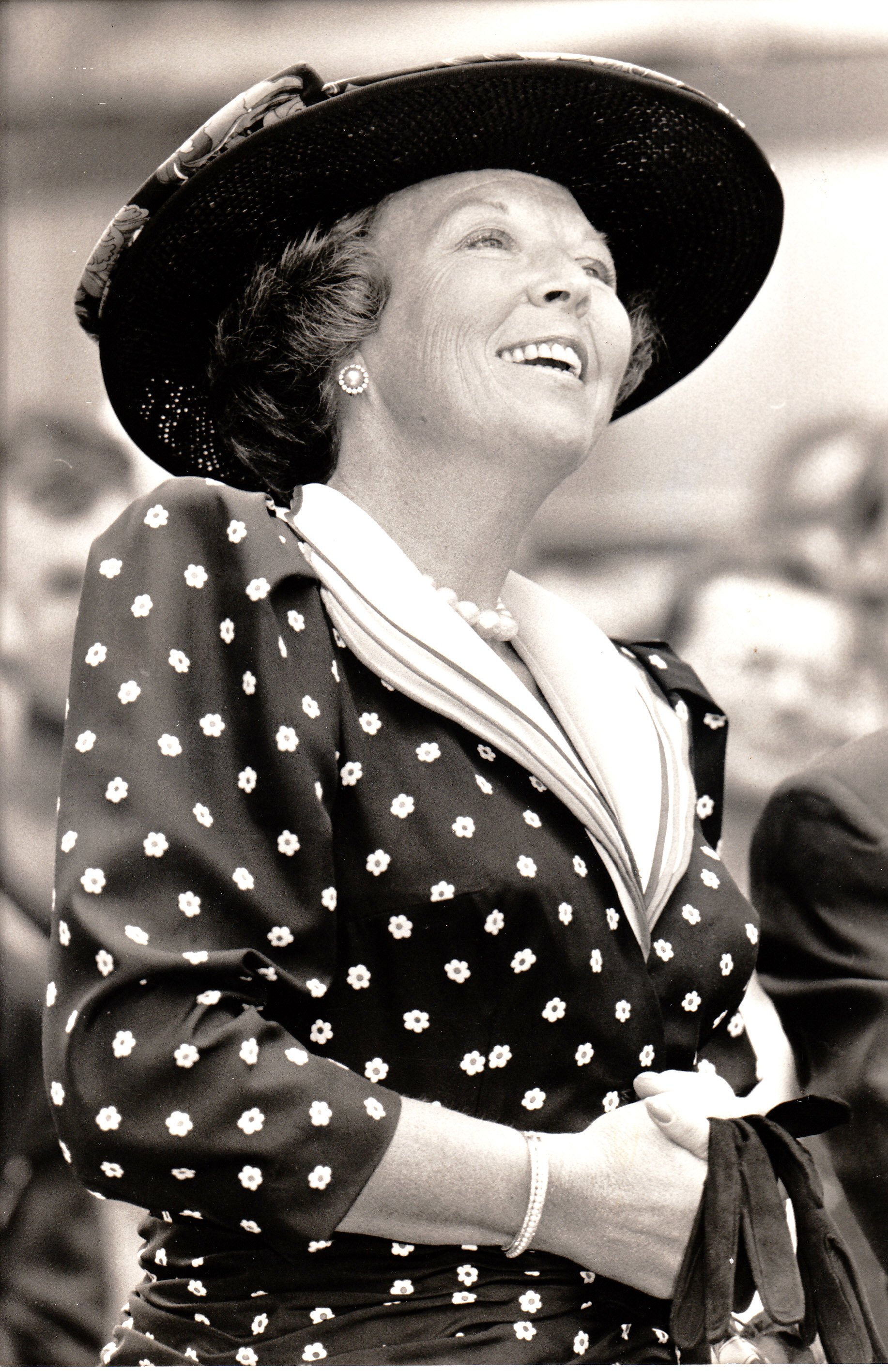 More in this category: « Erecting the Pillar The Unveiling (more info) »
back to top