'The Great Projector', creator of Seven Dials, Thomas Neale was an MP for 30 years, Master of the Mint and of the Transfer Office, Groom Porter, gambler and entrepreneur. His projects ranged from the development of Seven Dials, Shadwell (including brewing and Navy victualling), East Smithfield and Tunbridge Wells, to land drainage, steel and papermaking, mining in Maryland and Virginia, raising shipwrecks, to developing a dice to check cheating at gaming. He was also the author of numerous tracts on coinage and fund-raising and was involved in the idea of a National Land Bank, the precursor of the Bank of England. The extent of his interests - as a prominent Hampshire figure, as a member of the Royal Household, as a long-standing MP serving on dozens of Committees and as the promoter of an extraordinary plethora of projects - is difficult to comprehend. 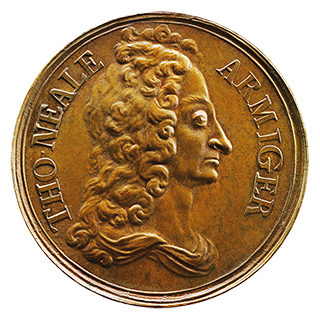 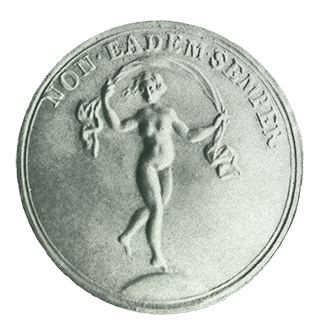 The only known portrait of Thomas Neale. A rare medalet of silver and copper: the reverse shows a figure of Fortune and the motto Non Eadem Semper. Courtesy of The British Museum.

Thomas Neale is one of the more extraordinary and most influential figures of late Stuart England and one of the least chronicled. He used his many contacts garnered via family, court and county connections to act as a middleman between men of money, the Court, other parties, fellow MPs and the general public. he was known as 'Golden Neal', as a result of his marriage to Lady Gould. Reputed to be worth £80,000, she in fact brought him £120,000. Samuel Pepys described their marriage:"the rich widow, my Lady Gould, is married to one Neale, after he had received a box on the eare by her brother...at the door, but made him draw and wounded him... She called Neale up to her and sent for a priest, married presently and went to bed. Her brother sent to the Court and had a Serjeant sent for Neale; but Neale sent for him up to be seen in bed, and she owned him for her husband and so all is past."

From 1668 Neale developed his interests as an MP sitting on no less than 62 committees and gaining the confidence of the Court party. By the early 1670s he was considered 'a person of Vast Estate and of great Interest as well at Court as in the City and Country...'

In February 1678 Neale was appointed Groom Porter to Charles II, a post which he also held under James II and William III. He bought the post for £6,000, although it had been committed elsewhere, and the official income was only £2 13s 4d. The suites at Whitehall, Hampton Court and Kensington Palace and the official carriages gave an entree to the Court and a range of contacts which made Neale's vast investment in the post worthwhile.

In July 1678 Neale was granted the office of Master of the Mint for life. He took up the appointment in July 1686 and was responsible for producing numerous proposals including for 'The National Land Bank, together with Money...' (1696), and 'The best way of disposing of Hammer'd Money and Plate ... As for Raising One Million of Money in ... 1697 by Way of a Lottery' (1697).

In 1694 he introduced 'lotteries after the Venetian manner' to raise further funds for the Crown. 100,000 shares were sold for £10 each. A prize fund of £40,000 was distributed annually to the fortunate shareholders whose tickets were drawn from a hat. John Evelyn records that his coachman won £40 and Samuel Pepys that the lotteries became "the talk of the town".

These were arguably England's first lotteries, arousing intense interest throughout the capital and, of course, promoting Neale himself. The 'Million Lottery' was authorised by Parliament through Neale's efforts as a MP and, as the press release states, lotteries so authorised until 1826 raised the astonishing sum of £35 million for The Exchequer.

The National Lottery was launched in 1992 by Peter Brooke MP, Secretary of State for National Heritage who, as the Member for the Cities of London and Westminster, gave (and continues to give) the Trust great support over the years, becoming a Patron. The Trust reminded Peter that, extraordinarily, the Government still had Neale's original 1694 lottery box. We assisted in drafting the press release (below). Its final paragraph reads "The Department of National Heritage, together with English Heritage, is grant aiding £16,000 towards a three-year community based plan for the area. This has been prepared by the Seven Dials Monument Charity (now the Trust) to ensure the area becomes a model of best practice for the conservation of historic streets and buildings". This support funded the second, 1998, version of the Seven Dials Renaissance Study. 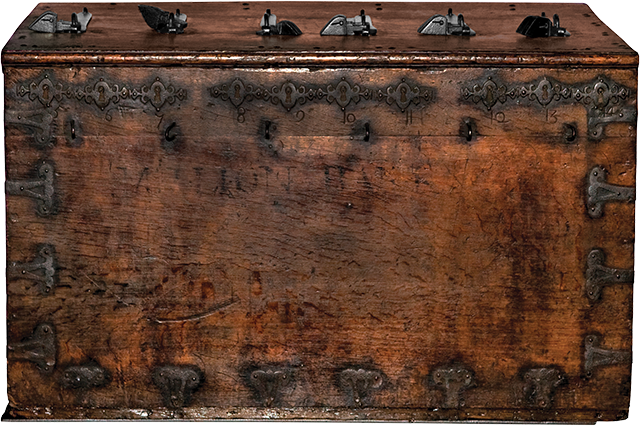 The press release below explains the complicated mechanism, designed to provide complete security. 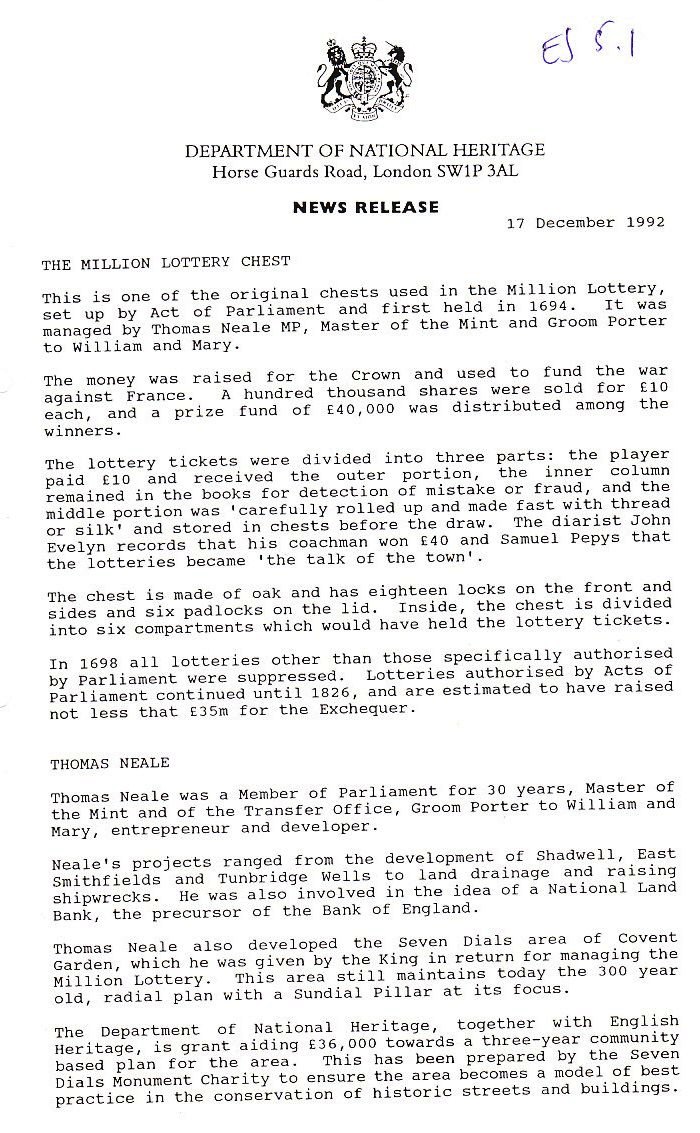 One of the background papers for the launch of the National Lottery, with material supplied by the Trust. The final paragraph encapsulates our efforts in Seven Dials. 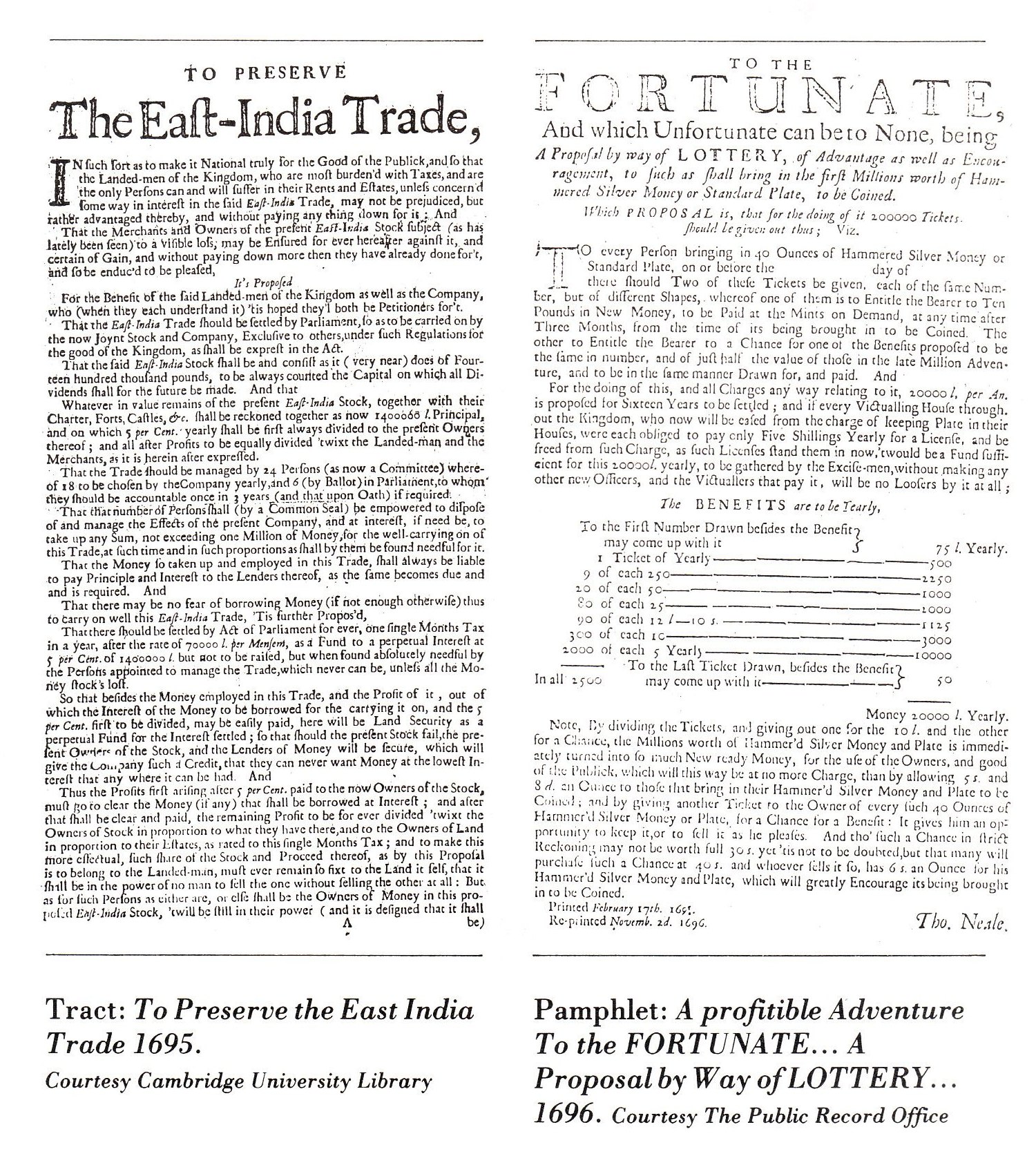 (L) One of Neale's many projects . (R) An explanation of the Lottery prizes in a promotional broadsheet with Neale's name at the foot. 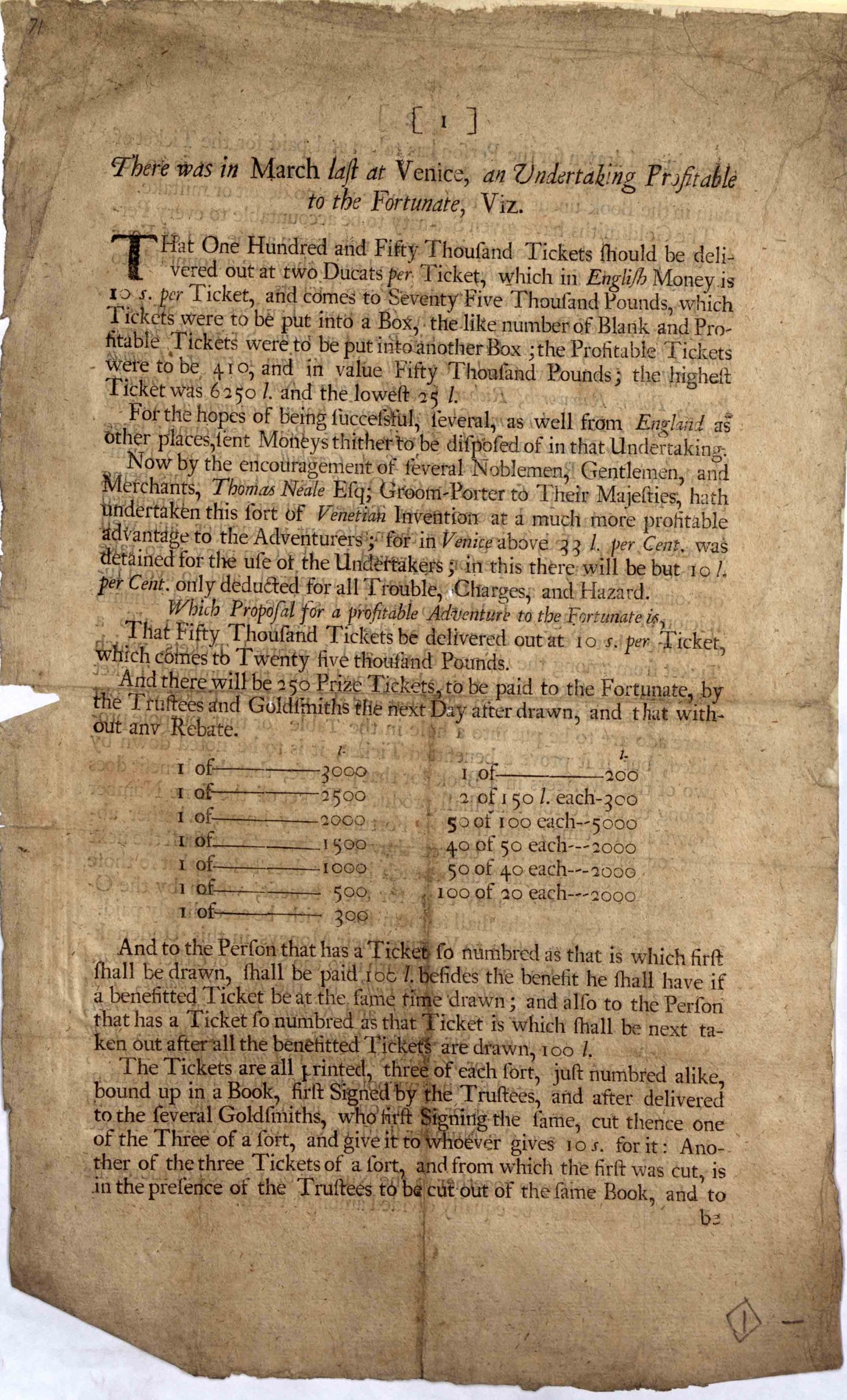 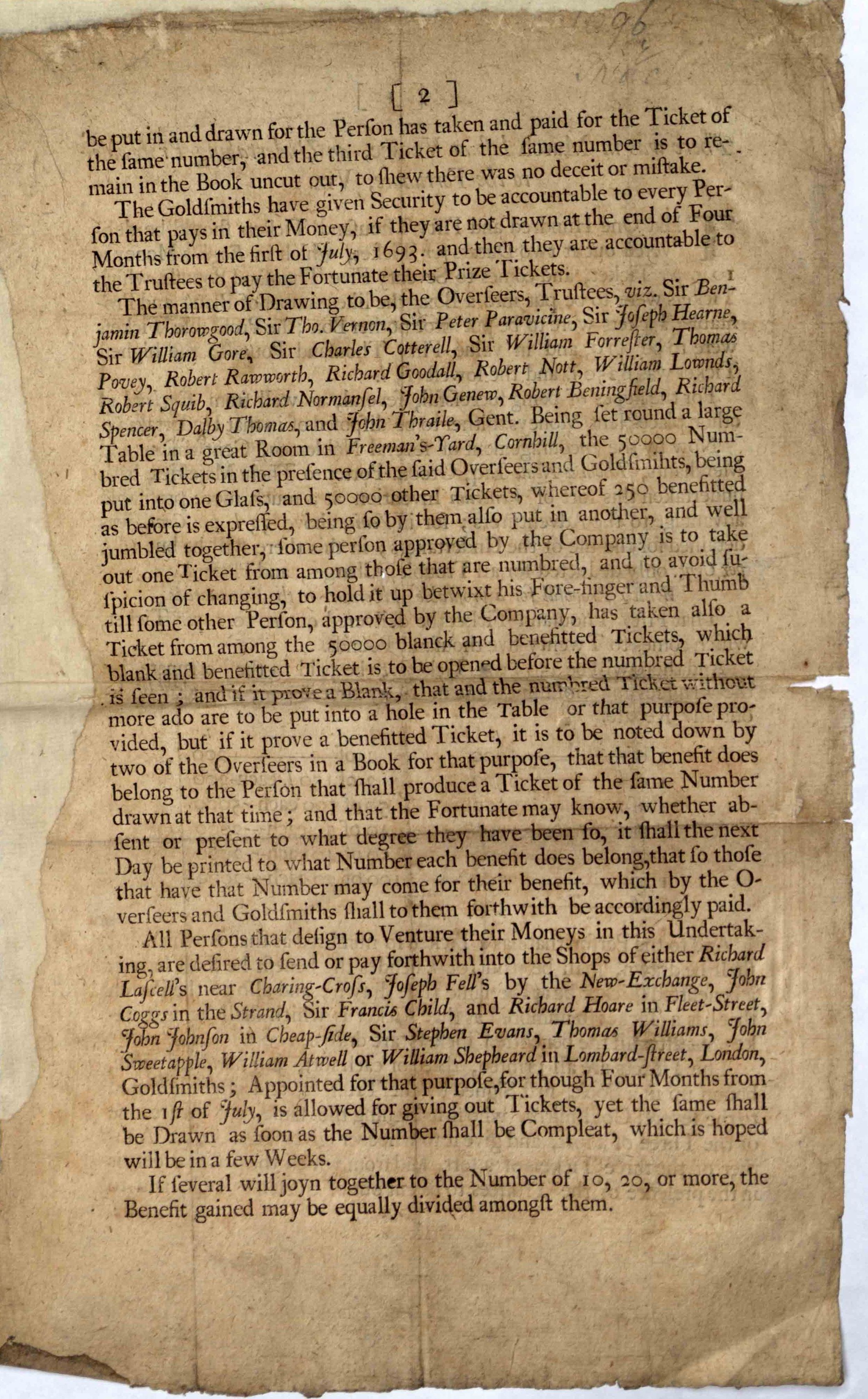 Neale's tract refers to the 'Venetian Lotteries' with a number of suggestions we would recognise today. He lists the shops where tickets could be purchased in the Strand, Fleet-Street, Lombard Street, Charing Cross etc. and also suggests that 'If several will joyn together to the number of 10, 20 or more, the Benefit gained may be equally divided amongst them.'

The Crown, in return for services rendered, influenced the grant to Neale of an area of land known as the Marshland or Cock & Pye Fields (the Cock & Pye being a public house in the south west corner of the land). Neale however had to purchase the remainder of the lease, which did not expire until 1731 for £4,000 and to continue to pay the ground rates for the buildings on the east side of the land, an additional £800 a year. He was then faced with the problem of how to maximise income from the land in order to meet his financial commitments. 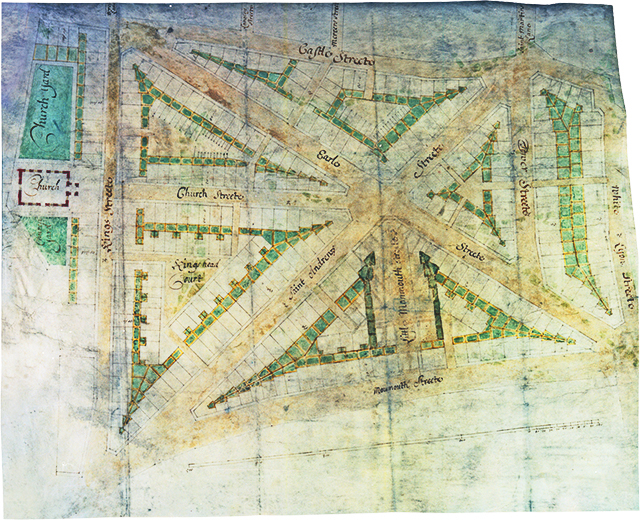 In a city where, since Inigo Jones designed the Piazza in Covent Garden, most developments had included a grand square, Neale's solution was imaginative and ingenious. By adopting a star-shaped plan with six radiating streets (subsequently seven were laid out), he dramatically increased the number of houses which could be built on the site. This increased the total site frontages and number of plots to be let for building and so greatly enhanced the overall site value (as ground rates were calculated according to the length of frontages).

In 1695 Neale, having laid out the streets, installed sewers, developed the corner plots and commissioned and installed the Sundial Pillar, disposed of his interest in the Seven Dials estate. Today his involvement is recorded only by two street names - Neal Street and Neal's Yard and in the mixed residential and commercial development, Thomas Neal's Centre.

More about the history of Thomas Neale and Seven Dials ...

Thomas Neale and the Development of Seven Dials by Dr James Thomas.

The Seven Dials: Freak of town-planning or simply ahead of its time? by Prof. C. Baer.