A Memorial to Francis Golding 2013 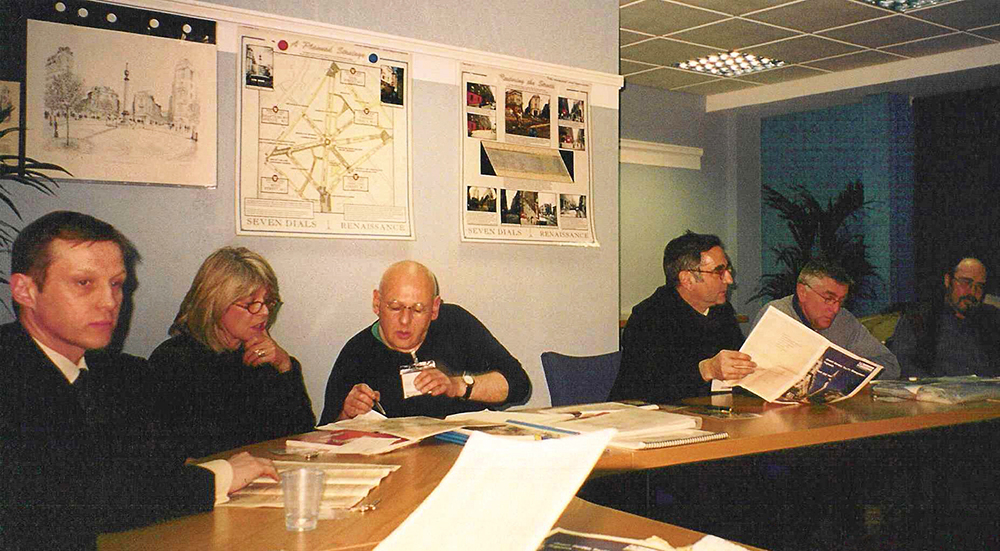 Our pioneering Seven Dials Renaissance Studies were carried out by a multi-disciplinary team. Francis Golding (above left holding a Camden Report) chaired the Trust's Environment Committee from 1994 and in particular chaired the Monitoring Committee which brought the last edition of the Seven Dials Renaissance Study to fruition. His consummate skills and experience had a great influence on the successful outcome, and his laconic style and pithy wit were much appreciated. Francis died from injuries sustained whilst riding his bike home in November 2013 — tragic news for all those who knew and worked with him.

The Trust has decided to dedicate the new 'Seven Dials Renaissance Study — Web Edition' to his memory and a substantial proportion of the new web-study fund received to date is made up of 'in-memory' donations.

The Trust is thankful to all who donated so far and hopes that it will be a fitting tribute to his life and work which were movingly set out in obituaries in The Times, Independent and other media.

Francis was an Assistant Secretary at the DOE, most notably in charge of the Urban Programme after the riots in 1981. He went to the newly created English Heritage as Head of Secretariat and then Head of Properties in Care and was Secretary of the Royal Fine Arts Commission. Latterly as a consultant he worked with many of the country's leading architects and developers on schemes which are now London landmarks.

Donations in Memory of Francis to date

All donations in memory of Francis Golding will automatically be applied to the Seven Dials Renaissance Study — Web Edition.

Read 11321 times
Published in All Projects
Tagged under
More in this category: « Lighting the Sundial Pillar Updating the Seven Dials Renaissance Studies »
back to top