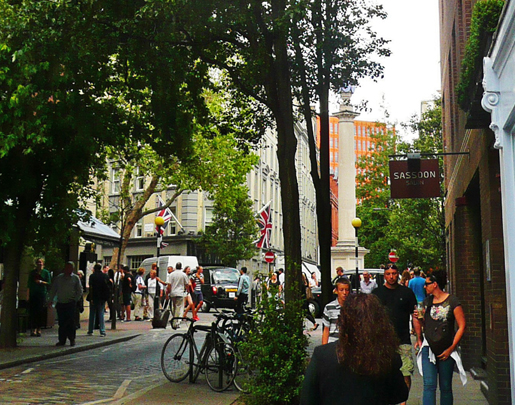 Street improvements have been a partnership - initially between the Trust, Camden and the Kleinwort Benson Property Fund (KBPF) and latterly with Shaftesbury PLC, the area's major freeholder. Improvements to date have been based on the template set out in the Seven Dials Renaissance Study, which is intended to set high standards for street improvements where London has lagged behind many European cities. The work in Monmouth Street, using multi-coloured dressed setts has influenced works throughout the West End and elsewhere.

The Seven Dials scheme has been of national importance in changing attitudes to and aspirations for the public realm. For well over a decade it has been used in presentations given throughout the UK to demonstrate what can be done to create a sense of place and establish an environment where pedestrians and traffic can successfully and positively intermingle.

Dressed setts (flat cobbles) have many advantages: they reduce vehicular noise, they are safer and easier for pedestrians to walk across and they reflect the various colours more vibrantly than traditional cobbles. Their use in Monmouth Street proved universally popular. However, subsequent excavations and faulty reinstatement by the various utilities companies have compromised the carriageway. The Trust is anxious to find a solution and is currently seeking funds to commission research into why these failures occur.

Read 7756 times
Published in All Projects
Tagged under
More in this category: « Updating the Exhibition Lighting the Sundial Pillar »
back to top