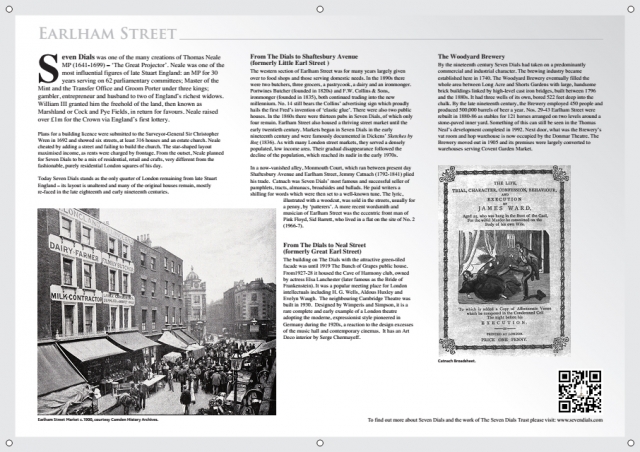 This plaque is kindly sponsored by CBRE Global Investors

The text of this plaque reads:

Seven Dials is one of the many creations of Thomas Neale MP (1641-1699) — The Great Projector. Neale was one of the most influential figures of late Stuart England: an MP for 30 years, serving on 62 parliamentary committees; Master of the Mint and the Transfer Office and Groom Porter under three kings; gambler, entrepreneur and husband to two of England's richest widows. William III granted him the freehold of the land then known as Marshland or Cock and Pye Fields, in return for favours. Neale raised over £1m for the Crown via England's first lottery

Plans for a building licence were submitted to Sir Christopher Wren, the Surveyor-General, in 1692 and showed six streets, at least 316 houses and an estate church. (Neale cheated by adding a street and failing to build the church). The star-shaped layout maximised income, as rents were charged by frontage. From the outset, Neale planned for Seven Dials to be a mix of residential, retail and crafts, very different from the fashionable, purely residential London squares of his day.

Today Seven Dials stands as the only quarter of London remaining from late Stuart England — its layout is unaltered and many of the original houses remain, mostly re-faced in the late eighteenth and early nineteenth centuries.

From The Dials to Shaftesbury Avenue (formerly Little Earl Street)

The western section of Earlham Street was for many years largely given over to food shops and those serving domestic needs. In the 1890s there were two butchers, three grocers, a pastrycook, a dairy and an ironmonger. Portwines Butcher (founded in 1820s) and F.W. Collins & Sons, ironmonger (founded in 1835), both continued trading into the new millennium. No. 14 still bears the Collins' advertising sign which proudly hails the first Fred's invention of 'elastic glue'. There were also two public houses. In the 1860s there were thirteen pubs in Seven Dials, of which only four remain. Earlham Street also housed a thriving street market until the early twentieth century. Markets began in Seven Dials in the early nineteenth century and were famously documented in Dickens' Sketches by Boz (1836). As with many London street markets, they served a densely populated, low income area. Their gradual disappearance followed the decline of the population, which reached its nadir in the early 1970s.

In a now-vanished alley, Monmouth Court, which ran between present day Shaftesbury Avenue and Earlham Street, Jemmy Catnach (1792-1841) plied his trade. Catnach was Seven Dials' most famous and successful seller of pamphlets, tracts, almanacs, broadsides and ballads. He paid writers a shilling for words, which were then set to a well-known tune. The lyric, illustrated with a woodcut, was sold in the streets, usually for a penny, by 'patterers'. A more recent wordsmith and musician of Earlham Street was the eccentric front man of Pink Floyd, Sid Barrett, who lived in a flat on the site of No. 2 (1966-7).

From The Dials to Neal Street (formerly Great Earl Street)

The building on The Dials with the attractive green-tiled facade was until 1919 The Bunch of Grapes public house. From 1927-28 it housed the Cave of Harmony club, owned by actress Elsa Lanchester (later famous as the Bride of Frankenstein). It was a popular meeting place for London intellectuals including H. G. Wells, Aldous Huxley and Evelyn Waugh. The neighbouring Cambridge Theatre was built in 1930. Designed by Wimperis and Simpson, it is a rare complete and early example of a London theatre adopting the moderne, expressionist style pioneered in Germany during the 1920s, a reaction to the design excesses of the music hall and contemporary cinemas. It has an Art Deco interior by Serge Chermayeff.

By the nineteenth century Seven Dials had taken on a predominantly commercial and industrial character. The brewing industry became established here in 1740. The Woodyard Brewery eventually filled the whole area between Long Acre and Shorts Gardens with large, handsome brick buildings linked by high-level cast iron bridges, built between 1796 and the 1880s. It had three wells of its own, bored 522 feet deep into the chalk. By the late nineteenth century, the Brewery employed 450 people and produced 500,000 barrels of beer a year. Nos. 29-43 Earlham Street were rebuilt in 1880-86 as stables for 121 horses arranged on two levels around a stone £paved inner yard. Something of this can still be seen in the Thomas Neal's development completed in 1992. Next door, what was the Brewery's vat room and hop warehouse is now occupied by the Donmar Theatre. The Brewery moved out in 1905 and its premises were largely converted to warehouses serving Covent Garden Market.

Thank you for your interest in the history of Earlham Street. The Seven Dials Trust's work has helped to maintain and enhance this unique quarter of London. Please browse through to find out more about our work.

Read 9432 times
More in this category: « Mercer Street
back to top