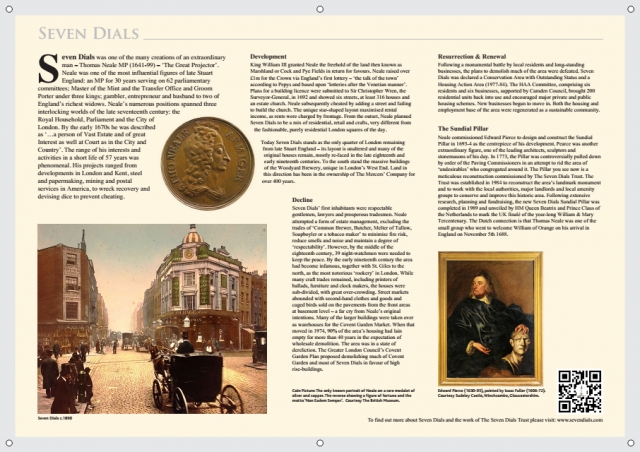 This plaque is kindly sponsored by Shaftesbury PLC.

The text of the plaque reads:

Seven Dials is one of the many creations of an extraordinary man — Thomas Neale MP (1641-99) — ‘The Great Projector’. Neale was one of the most influential figures of late Stuart England: an MP for 30 years serving on 62 parliamentary committees; Master of the Mint and the Transfer Office and Groom Porter under three kings; gambler, entrepreneur and husband to two of England's richest widows. Neale's numerous positions spanned three interlocking worlds of the late seventeenth century: the Royal Household, Parliament and the City of London. By the early 1670s he was described as ‘…a person of Vast Estate and of great Interest as well at Court as in the City and Country’. The range of his interests and activities in a short life of 57 years was phenomenal. His projects ranged from developments in London and Kent, steel and papermaking, mining and postal services in America, to wreck recovery and devising dice to prevent cheating.

King William III granted Neale the freehold of the land then known as Marshland or Cock and Pye Fields in return for favours. Neale raised over £1m for the Crown via England's first lottery — ‘the talk of the town’ according to Pepys and based upon ‘lotteries after the Venetian manner’. Plans for a building licence were submitted to Sir Christopher Wren, the Surveyor-General, in 1692 and showed six streets, at least 316 houses and an estate church. Neale subsequently cheated by adding a street and failing to build the church. The unique star-shaped layout maximised rental income, as rents were charged by frontage. From the outset, Neale planned Seven Dials to be a mix of residential, retail and crafts, very different from the fashionable, purely residential London squares of the day.

Today Seven Dials stands as the only quarter of London remaining from late Stuart England — its layout is unaltered and many of the original houses remain, mostly re-faced in the late eighteenth and early nineteenth centuries. To the south stand the massive buildings of the Woodyard Brewery, unique in London's West End. Land in this direction has been in the ownership of The Mercers' Company for over 400 years.

Seven Dials' first inhabitants were respectable gentlemen, lawyers and prosperous tradesmen. Neale attempted a form of estate management, excluding the trades of 'Common Brewer, Butcher, Melter of Tallow, Soapboyler or a tobacco maker' to minimise fire risk, reduce smells and noise and maintain a degree of 'respectability'. However, by the middle of the eighteenth century, 39 night-watchmen were needed to keep the peace. By the early nineteenth century the area had become infamous, together with St. Giles to the north, as the most notorious 'rookery' in London. While many craft trades remained, including printers of ballads, furniture and clock makers, the houses were sub-divided, with great over-crowding. Street markets abounded with second-hand clothes and goods and caged birds sold on the pavements from the front areas at basement level — a far cry from Neale's original intentions. Many of the larger buildings were taken over as warehouses for the Covent Garden Market. When that moved in 1974, 90% of the area's housing had lain empty for more than 40 years in the expectation of wholesale demolition. The area was in a state of dereliction. The Greater London Council's Covent Garden Plan proposed demolishing much of Covent Garden and most of Seven Dials in favour of high rise-buildings.

Following a monumental battle by local residents and long-standing businesses, the plans to demolish much of the area were defeated. Seven Dials was declared a Conservation Area with Outstanding Status and a Housing Action Area (1977-84). The HAA Committee, comprising six residents and six businesses, supported by Camden Council, brought 200 residential units back into use and encouraged major private and public housing schemes. New businesses began to move in. Both the housing and employment base of the area were regenerated as a sustainable community.

Neale commissioned Edward Pierce to design and construct the Sundial Pillar in 1693-4 as the centrepiece of his development. Pierce was another extraordinary figure, one of the leading architects, sculptors and stonemasons of his day. In 1773, the Pillar was controversially pulled down by order of the Paving Commissioners in an attempt to rid the area of 'undesirables' who congregated around it. The Pillar you see now is a meticulous reconstruction commissioned by The Seven Dials Trust. The Trust was established in 1984 to reconstruct the area's landmark monument and to work with the local authorities, major landlords and local amenity groups to conserve and improve this historic area. Following extensive research, planning and fundraising, the new Seven Dials Sundial Pillar was completed in 1989 and unveiled by HM Queen Beatrix and Prince Claus of the Netherlands to mark the UK finalé of the year-long William & Mary Tercentenary. The Dutch connection is that Thomas Neale was one of the small group who went to welcome William of Orange on his arrival in England on November 5th 1688.

Thank you for your interest in the history of Seven Dials. The Seven Dials Trust's work has helped to maintain and enhance this unique quarter of London. Please browse through to find out more about our work.

Read 9714 times
More in this category: Short's Gardens »
back to top