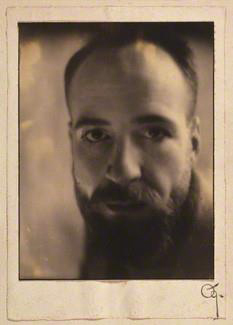 Photographer Angus McBean was born in Monmouthshire. After the death of his father in 1924, the family moved to London and Angus worked for the department store Liberty's (1926-33) as an antiques salesman. He became obsessed with theatre and his first design commission was work for Gielgud's 1933 production of Richard of Bordeaux. He continued to photograph and in 1935 opened his own studio, soon photographing at the Old Vic. He began radical experiments with photographic portraiture, using the devices of surrealism to create fantastical images of theatrical stars—Vivien Leigh, enveloped in a plaster of Paris gown and posed among cotton-wool clouds or the impresario Binkie Beaumont as a giant puppet-master. He sent the photographs out as Christmas cards to an ever-widening circle of friends and associates. After the end of the Second World War (during the course of which he spent some time in prison as a conscientious objector), he opened a bigger studio in Endell Street and, during the 1940s and 1950s, he was inundated with commissions from London's major theatre companies. In the early 1960s McBean photographed the Beatles for the cover of their first album, but fashions changed and his style became unpopular. He had a flamboyant appearance, with a thick beard and wore handmade clothes. He retired to Suffolk in 1970.