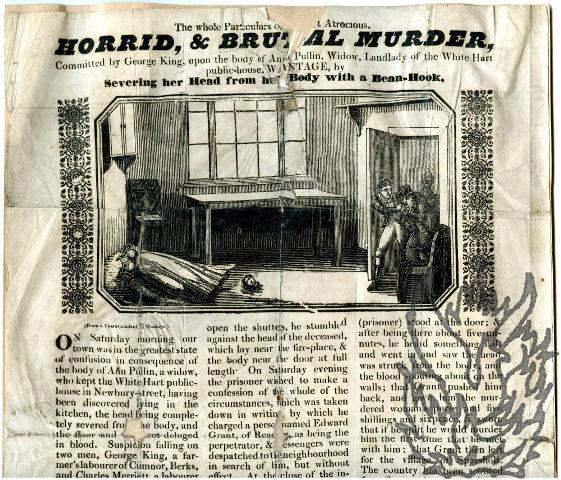 Location: Nos.2&3 Monmouth Court, no longer extant – ran between what is now Shaftesbury Ave and Earlham Street, opposite the entrance to Tower Court

Seven Dials' most famous and successful chapbook seller, James 'Jemmy' Catnach founded his business here in 1813. He paid writers, usually anonymous, a shilling for the words, which were then normally set to a well-known tune. The lyric was typeset, illustrated with a little woodcut in a vigorous if crude design on the cheapest paper available. They were then sold in the streets, usually for a penny, by 'patterers'. In 1839 he retired to South Mimms, but collapsed and died of jaundice on a visit to his shop in Monmouth Court two years later. The business was taken over by his sister Ann Ryle and was still running in the 1850s when Henry Mayhew chronicled the life of the patterers among a host of other street sellers in his London Labour and the London Poor. Sources: Numerous. British Museum collection; Catnach catalogue 1832; C Hindley, The Catnach Press (1869) and The life and times of James Catnach (1878); H Mayhew, London Labour and the London Poor.