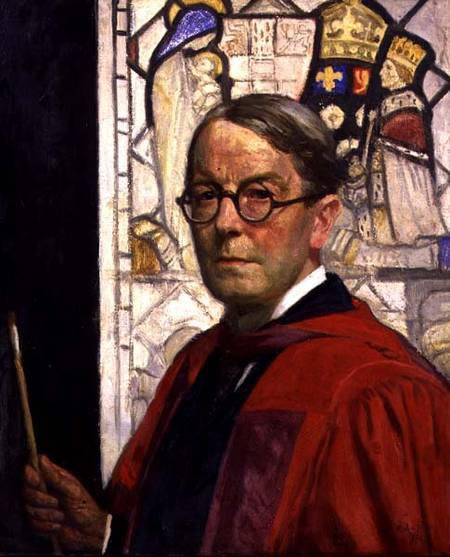 Robert Anning Bell was articled at age 14 in his uncle's office, undertaking detailed architectural drawings. He then went to Westminster School of Art. He experimented with a form of low-relief painted plaster sculpture inspired by the work of the Renaissance artist Luca della Robbia. A generous gift from a purchaser enabled him to travel throughout Europe. On his return he began exhibiting at the Arts and Crafts Exhibition Society, an offshoot of the Art-Workers' Guild to which Bell was elected in 1891, becoming Master in 1921. From the mid-1890s onwards Bell became increasingly successful as a book designer and illustrator. He branched out into mosaic and stained glass, gaining important public commissions such as the façade of the Horniman Museum and work at Westminster Cathedral and for the Palace of Westminster. He painted as well, becoming a Royal Academician in 1922, and later specialised in water-colours. In 1911 he took up teaching again at the Glasgow School of Art and was later appointed professor of design at the Royal College of Art. Bell epitomized the arts and crafts ideal, in which movement he was a central figure.