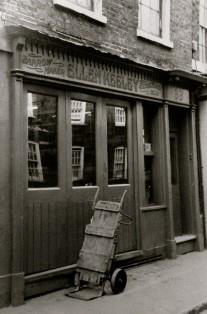 Location: No.33 Neal Street and in Nottingham Court

33 Neal Street was the main premises of barrow-making firm of Ellen Keeley established in Ireland in 1830. The Keeley family came to England at the time of the potato famine and lived in nearby Nottingham Court. James Keeley invented and produced the costermonger's barrow, like a shop on wheels, and also developed the donkey barrow, once a familiar sight in London. In 1891 he was living at No.12 Nottingham Court and the elderly costermonger Ellen was living alone at No.8. In the 1960s the firm branched out into hiring their vehicles to the film industry (Keeley Hire in Hoddesdon).