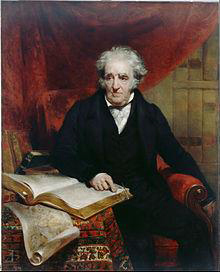 Thomas Stothard was born at The Black Horse Inn which was run by his father. Ratebooks show this was later renamed The White Horse Inn. An only child, Thomas was sent to school in Yorkshire, moving back to London in 1770. He was apprenticed to a silk weaver, designing silk patterns, and then entered the Royal Academy Schools, where he befriended John Flaxman and William Blake. He began producing illustrations for books, particularly historical scenes, which was to prove a constant and lucrative source of income. He was elected RA in 1794. He could charge high prices for his history paintings and bought a grand house at No.28 Newman Street, where he lived for the rest of his life. His most famous commission was a painting from Chaucer, The Pilgrimage to Canterbury, in a flat frieze-like form, then considered very authentic and exhibited across England and Scotland. The engraving after the work was one of the most successful prints of the 19th century. His personal life was tinged with tragedy – his eldest son was shot and his second died suddenly, his third suffered a paralytic stroke; only four of his 11 children survived him. Turner likened Stothard to Giotto but his reputation as one of the foremost history painters of his day has not lasted, although he is remembered as probably the most prolific book illustrator of the late 18th and early19th centuries.