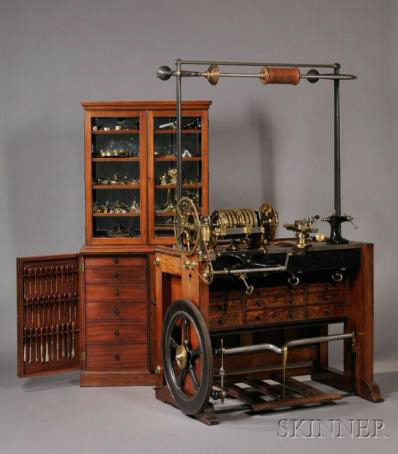 John Jacob Holtzapffel was born in Strasbourg and trained as a mechanic. Here he probably met the journeyman locksmith John George Deyerlein (1767-1829). Deyerlein arrived in London in 1790 and Holtzapffel two years later. In 1794 he went into business, with Deyerlein as an employee. He was made a partner in 1804, remaining one until 1827 when the partnership was dissolved. The Holztappfel business continued, being carried on by his family until about 1930. Although neither the originator nor the only maker of ornamental turning lathes, Holtzapffel was the most famous and brought them to their zenith in the 19th century. The company (which also made other mechanical and edge tools, as well as dealing in ivory and hardwoods for turners) sold plain lathes and ornamental turning lathes which could fetch £400 - several years' wages for an ordinary workman. Their main market was wealthy amateurs: clergy, aristocrats and heads of state. Queen Victoria gave Archduke Otto von Hapsburg of Austria a lathe by Holtzapffel as a wedding present in 1886. No.127 was the home of his son, Charles Holtzapffel (1806-47) and the shop of Holtzapffel and Co.